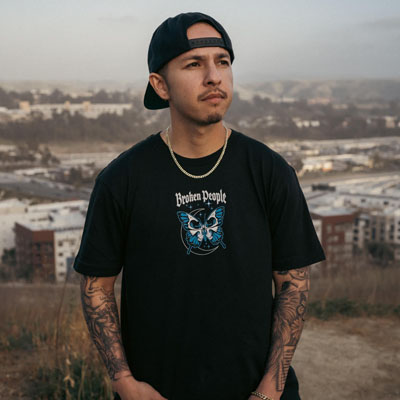 Born & raised in Santa Ana California, Mark Henriquez better known as Gremlin has been making music since before he was even a teenager. Influenced by his older brother, he grabbed a pen and pad and hasn’t looked back since. With his family behind him every step of the way Gremlin has turned his childhood dreams into a reality accumulating over a million cult fans across the world with his music & brand “Broken People”.

“I make music for people who’ve gone through pain and feel broken. My community is built of those who don’t let their past define them and are working towards being a better version of themselves”. Bringing unsuspecting riders to tears with his uber rap series, Gremlin has gained notoriety landing him on stages across the west coast of the USA & even on Fox News discussing his hit single “All For You” which depicts the story of his moms addiction to drugs.

This year Mark has big plans and is more focused than ever to release his long awaited new album that has been 5 years in the making. With a country wide tour already in the works it’s safe to say that Gremlin is dreaming bigger than ever before.